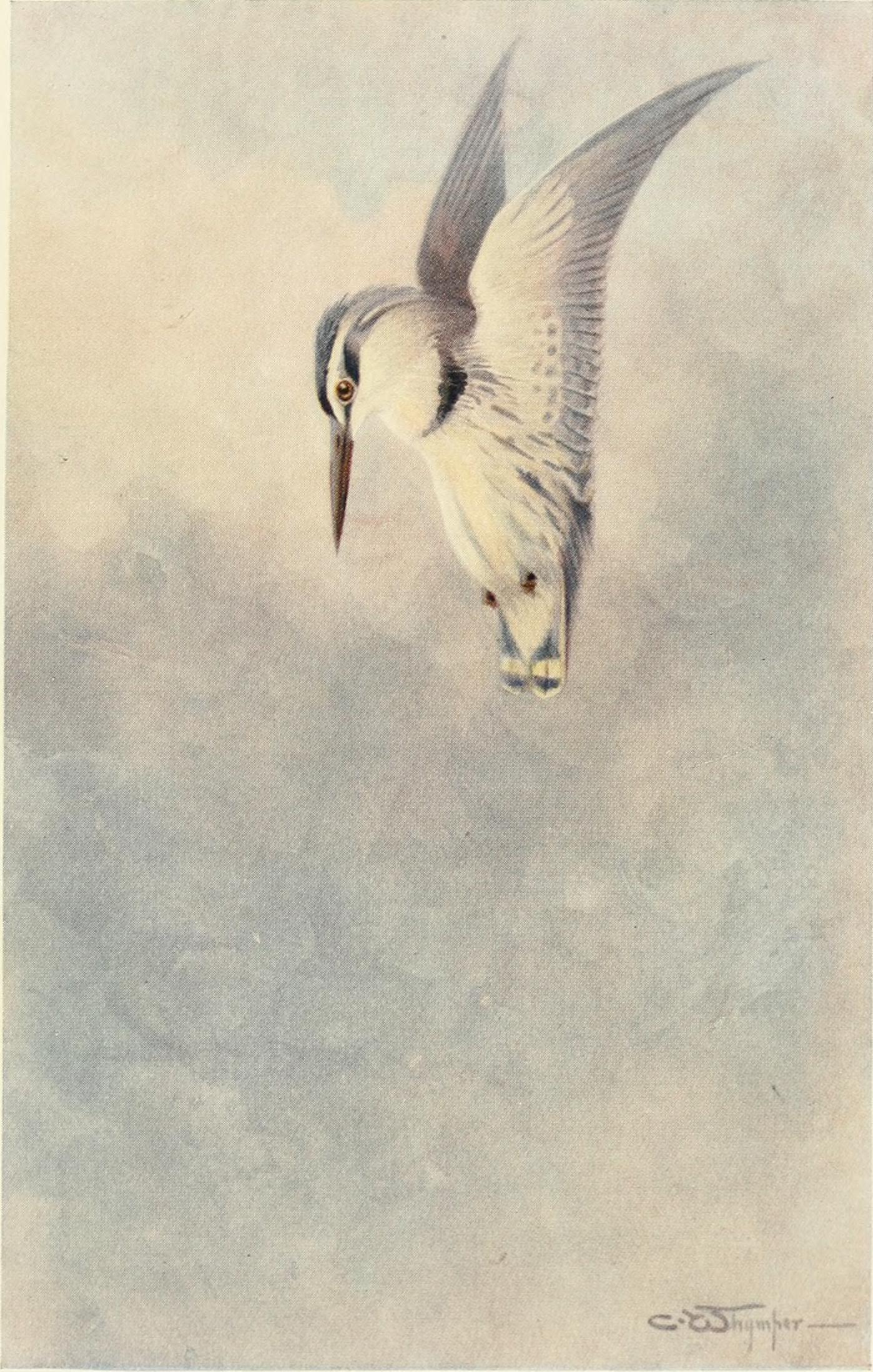 Text Appearing Before Image:
s not beloved ofthe people, as they accuse it of eating too manyof their young fish. Visitors who do not like theirmuddy Nile fish do not see any great offbnce inthis, but I can quite see the matter from thenatives point of view, and am a little astonishedthat it has been allowed to increase and multiplyas it has. Last year, each evening, something likethirty used to roost on the chain cable of Mr.Daviss dahabeah, moored just opposite Luxor.Where they all came from was something of amystery, as, though you would see one now andagain on that reach of river, you would neverbe able to see anything like that number; yetevery evening in they used to come, and after arather excited noisy discussion settled down toroost for the night. A most interesting thing in this bird is itssingular habit of hanging in mid-air, above thewater, on the look – out for fish. Although Ihave said fish, it is certain it must take othercreatures than fish, for I have often seen it, not BLACK AND WHITE KINGFISHER

Text Appearing After Image:
BLACK AND WHITE KINGFISHER 53 only hovering over the Sacred Lake at Karnak,but also plunging head foremost down into itswaters, and securing some food or other, withwhich it has at once flown away to some con-venient perch and there swallowed it. Now thereare no fish in the Karnak Lake, and it is clearthat what the Kingfisher goes for must be somevariety of its ordinary fishy food, and must be somelarvsB or fine fat water-beetle. When hangingthus in mid-air it reminds me a little of ourown Windhover or Kestrel, in its quick clappingstroke of wings, whilst its body and tail hangnearly perpendicularly down, till it sees whatit wants ; then the position of its body alters ina flash, and down it plunges, and is lost for amoment in the splash and spray that it raises bythe impact with the water. THE LITTLE GREEN BEE-EATER Merops viridis The plumage throughout is green, with a black eye-stripeand a black marking in front on chest; legs brown, beakblack, eyes crimson, two centre tail-feather

This business is 100% owned by me as the black woman, it is trading genral … END_OF_DOCUMENT_TOKEN_TO_BE_REPLACED

CDK Security is based in the Karoo town of Cradock. We deliver security … END_OF_DOCUMENT_TOKEN_TO_BE_REPLACED

Cathy's Guesthouse is situated in central Cradock near to local shops, … END_OF_DOCUMENT_TOKEN_TO_BE_REPLACED

Karoo Space is the leading website on the Karoo, South Africa's Heartland. … END_OF_DOCUMENT_TOKEN_TO_BE_REPLACED

Cradock House consists of five rooms within the main house, as well as two … END_OF_DOCUMENT_TOKEN_TO_BE_REPLACED