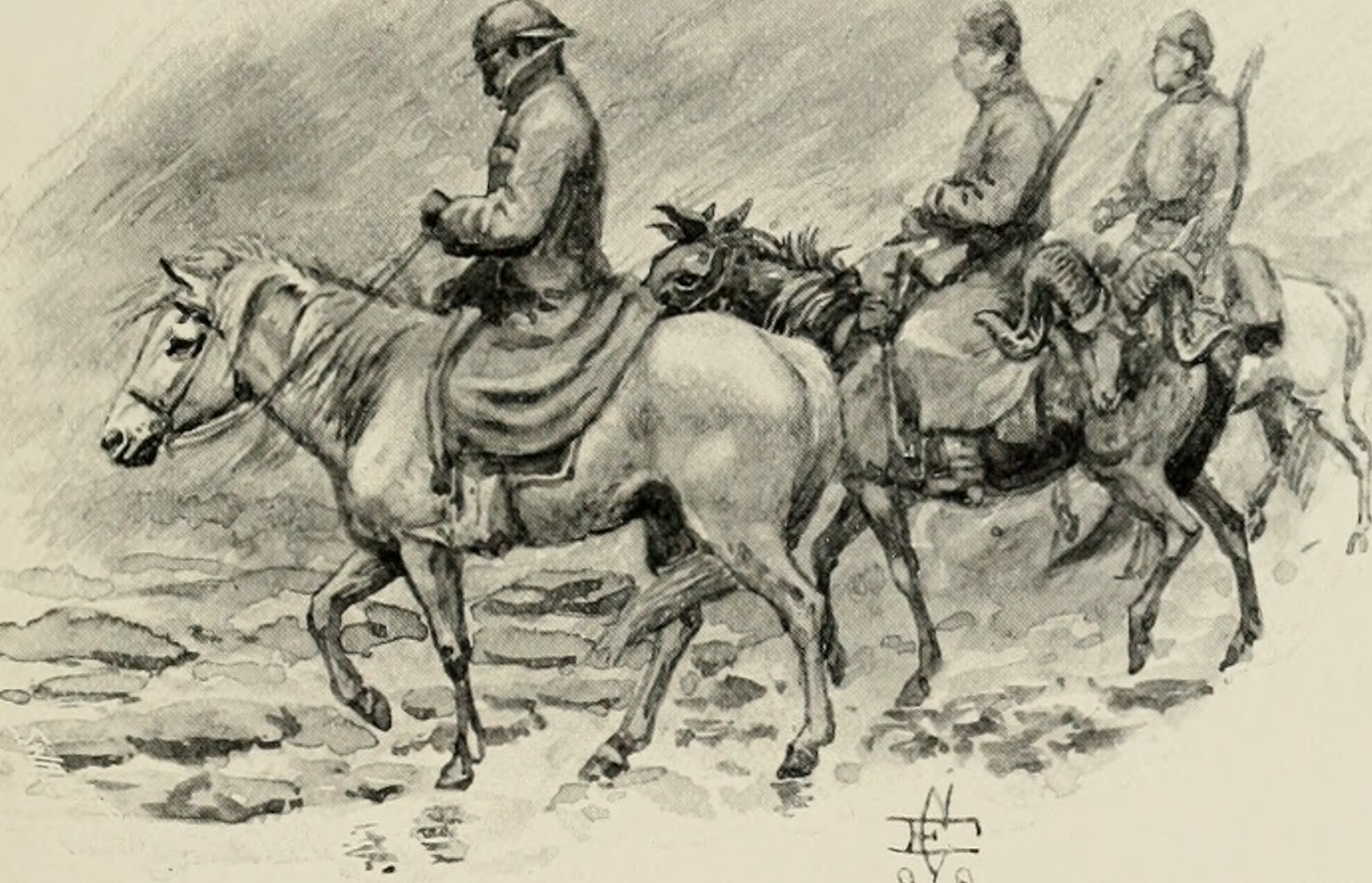 Text Appearing Before Image:
d that the few that remained hadtaken refuge in the wooded districts on the Siberianside. We also saw a great number of sheep horns inthe bed of the stream, whose owners had probablybeen killed by wolves, or had been starved to deathby severe winters and heavy snowfalls. The countrybore altogether a touch of wildness and desolation.Towards noon we were caught in a dreadful hail-storm, and returned to camp at 3 p.m. with mywell – deserved trophy. I found Littledale in lowspirits ; his hunters had taken him by mistake tomy ground, and he had convinced himself of theerror by discovering our party as we were enteringthe Happy Valley. That evening Vassili, the cook, produced fordinner roast fillet of kotc/ikor, which we found A FRESH START 117 excellent. As for the broth, it was quite good, andhenceforward replaced Maggis cousommd, which wehad been constantly using. Later on in the season,when the animals became fatter, we had to abandontheir meat, owing to their strong sheepy flavour, for

Text Appearing After Image:
RETURNING TO CAMP. that of their domestic kinsmen, where stray Kirghizprocured us the latter. On the following morning,June 21st, the wind had not abated, and it was nottill 7 a.m. that we left camp. This time Littledalewent towards my old nullah where I had twice beensuccessful. As for myself, I started with Taba inthe direction of the valley westwards. It was n8 AFTER WILD SHEEP IN THE ALTAI certainly not a promising day, and we rode a longway without even expecting to see anything. Thevalley was a wider one than that of Bain-Tchagan,with more overhanging crags on either side andno nice boulders with fresh grass between. At thebottom flowed a small, nameless stream, forminghere and there small lakes and swamps. We spiedan immense side-corry to our left, but saw nothingbut rocks and snow. A little further I discovereda herd of female Ibex on the opposite side, probablythe same which Littledale had seen two days pre-viously, but no signs of males ; in fact, the placedid not in the lea

Cathy's Guesthouse is situated in central Cradock near to local shops, … END_OF_DOCUMENT_TOKEN_TO_BE_REPLACED

Karoo Space is the leading website on the Karoo, South Africa's Heartland. … END_OF_DOCUMENT_TOKEN_TO_BE_REPLACED

CDK Security is based in the Karoo town of Cradock. We deliver security … END_OF_DOCUMENT_TOKEN_TO_BE_REPLACED

This business is 100% owned by me as the black woman, it is trading genral … END_OF_DOCUMENT_TOKEN_TO_BE_REPLACED

Albert House is a beautiful early Victorian Manor House, set in a large and … END_OF_DOCUMENT_TOKEN_TO_BE_REPLACED

Karoo Werf Gastehuis Sis situated in the historical town of Cradock, a … END_OF_DOCUMENT_TOKEN_TO_BE_REPLACED

The gracious Victorian-style homestead, Heritage House, is situated in a … END_OF_DOCUMENT_TOKEN_TO_BE_REPLACED