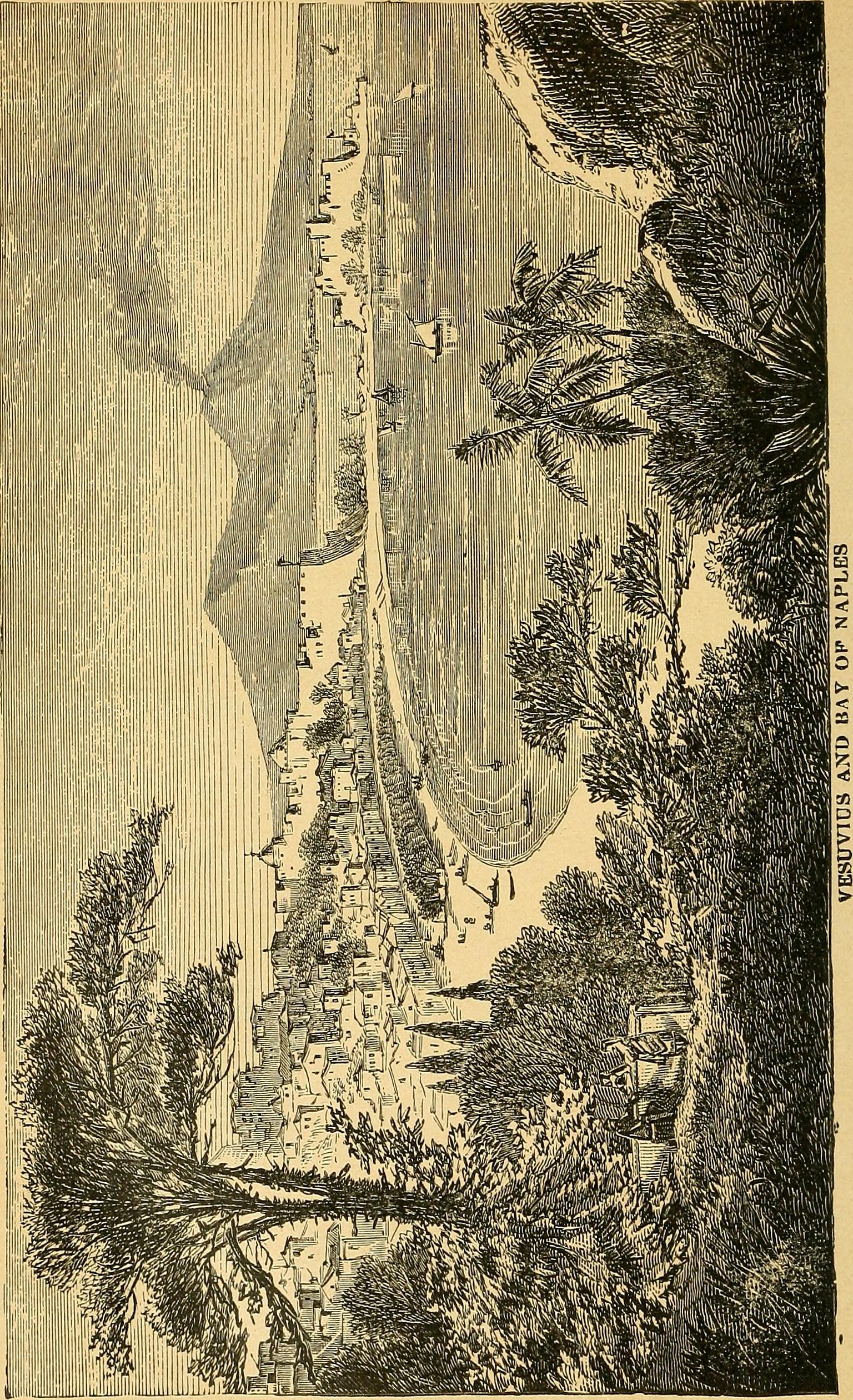 Text Appearing Before Image:
test the capabilities of the place. The dog dies in aminute and a half—a chicken instantly. As a general thing,strangers who crawl in there to sleep do not get up until theyare called. And then they dont either. The stranger thatventures to sleep there takes a permanent contract. I longedto see this grotto. I resolved to take a dog and hold him my-self; suffocate him a little, and time him ; suffocate him somemore and then finish him. We reached the grotto at aboutthree in the afternoon, and proceeded at once to make the(ixperiments. But now, an important difficulty presenteditself. We had no dog. ASCENT OF VESUVIUS—CONTINUED. At the Hermitage we were about fifteen or eighteen hun-dred feet above the sea, and thus far a portion of the ascenthad been pretty abrupt. For the next two miles the road wasa mixture—sometimes the ascent was abrupt and sometimes itwas not: but one characteristic it possessed all the time, with-out failure—without modification—it was all uncompromis-

Text Appearing After Image:
THE SUMMIT REACHED. 323 ingly and unspeakably infamous. It was a rough, narrowtrail, and led over an old lava flow—a black ocean wliicli wastumbled into a thousand fantastic shapes—a wild chaos ofruin, desolation, and barrenness—a wilderness of billowy up-heavals, of furious whirlpools, of miniature mountains rentasunder—of gnarled and knotted, wrinkled and twistedmasses of blackness that mimicked branching roots, greatvines, trunks of trees, all interlaced and mingled together:and all these weird shapes, all this turbulent panorama, allthis stormy, far-stretching waste of blackness, with its thrill-ing suggestiveness of life, of action, of boiling, surging,furious motion, was petrified !—all stricken dead and cold inthe instant of its maddest rioting !—fettered, paralyzed, andleft to glower at heaven in impotent rage for evermore! Finally we stood in a level, narrow valley (a valley that hadbeen created by the terrific march of some old time irruption)and on either hand t

This business is 100% owned by me as the black woman, it is trading genral … END_OF_DOCUMENT_TOKEN_TO_BE_REPLACED

Cathy's Guesthouse is situated in central Cradock near to local shops, … END_OF_DOCUMENT_TOKEN_TO_BE_REPLACED

CDK Security is based in the Karoo town of Cradock. We deliver security … END_OF_DOCUMENT_TOKEN_TO_BE_REPLACED

Karoo Space is the leading website on the Karoo, South Africa's Heartland. … END_OF_DOCUMENT_TOKEN_TO_BE_REPLACED

Cradock House consists of five rooms within the main house, as well as two … END_OF_DOCUMENT_TOKEN_TO_BE_REPLACED