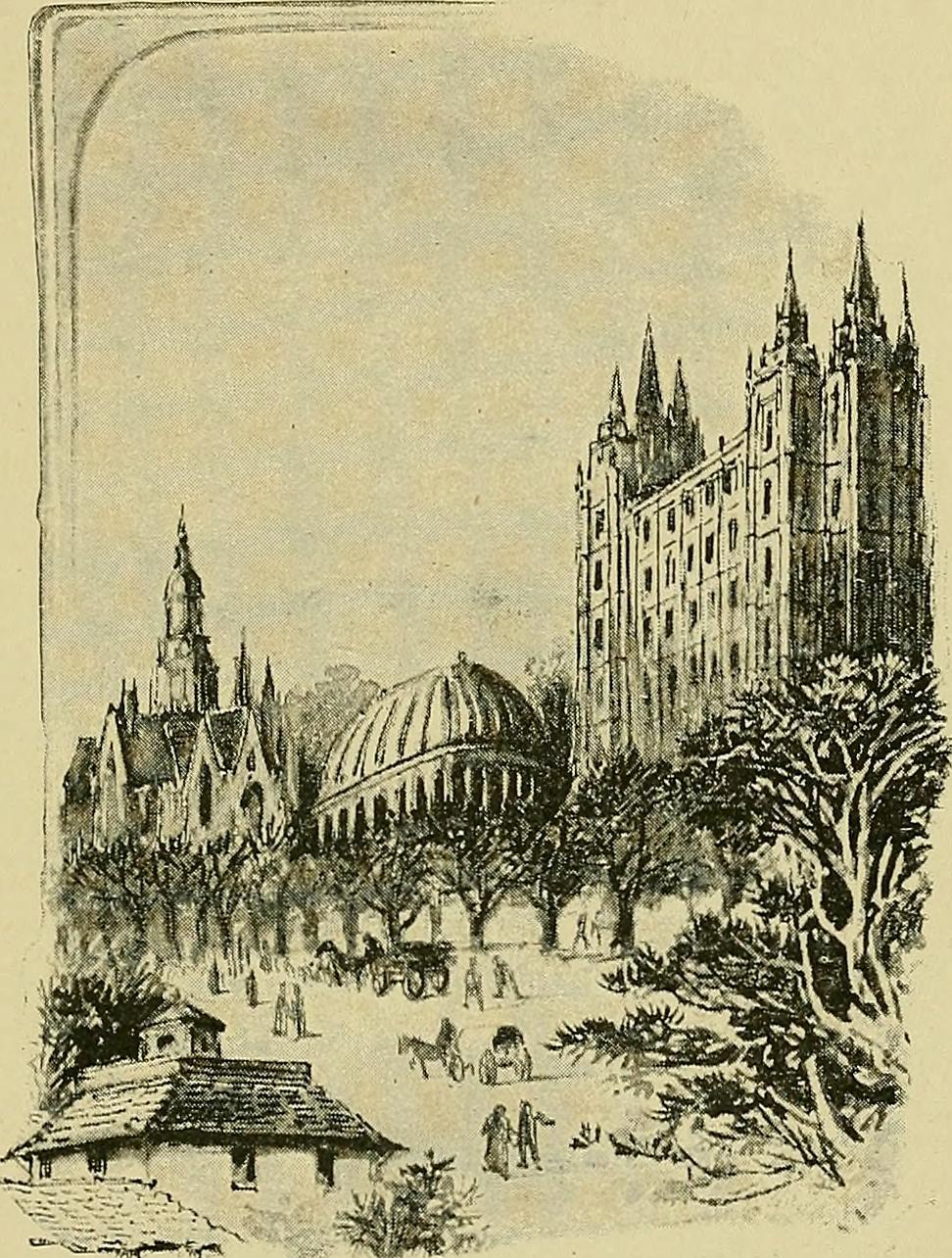 Text Appearing Before Image:
.Then you descend toward the fertile valley of the SaltLake in Utah. The Mormons have been described adnauseam, and there is nothing new to be looked for intheir midst; they are ancient history. By a new law ofthe United States, polygamy is no longer tolerated, and JOHN BULL & CO. 35 if Artemus Ward were now alive, and about to giveone of his delightfully humorous talks there, he couldno longer put on the complimentary ticket given tosome Mormon to whom he wished to show a politeness, Admit bearerand one wife.In Salt LakeCity you arestruck by thecleanliness, thequietness, andthe general airof prosperity ofthe place. TheMormons aremeek-voicedand mild-man-nered, as onewould expect inthe descendantsof an oppressedsect. Attend-ants are politeand altogethera great contrastto the same classo f persons o nthe other side ofthe Rockies. The Mormons continue to believe andcall themselves Saints. This is a harmless mania thathurts nobody. Before eettins; into California there remains but the

Text Appearing After Image:
TEMPLE SQUARE, SALT LAKE CTrY. 36 JOHN BULL & CO. State of Nevada to cross, a sandy, arid land, which formsa curious contrast with the fertile Salt Lake valley andthe luxuriant plains of California between which it lies.Some Indians, majestically draped in blankets and withfeathers in their hair, a few cowboys with sombrerosstuck on the back of the head give a touch of the pic-turesque to this scene of desolation, a scene almostgrandiose in its dreariness. After the sandy desert istraversed, the ground begins to rise once more, natureshows signs of life again, and presently you are in theSierras, which to my thinking are still more picturesqueand much grander than the Rockies. The RockyMountains are certainly mountainous and undeniablyrocky, but the landscape has not the majesty of theSierras. The Rocky Mountains are wild and arid ; theSierras are luxuriant with verdure. You are nearingthe home of perpetual spring. All is gay and smiling:the blue sky, the slopes of the mountains c

This business is 100% owned by me as the black woman, it is trading genral … END_OF_DOCUMENT_TOKEN_TO_BE_REPLACED

CDK Security is based in the Karoo town of Cradock. We deliver security … END_OF_DOCUMENT_TOKEN_TO_BE_REPLACED

Cathy's Guesthouse is situated in central Cradock near to local shops, … END_OF_DOCUMENT_TOKEN_TO_BE_REPLACED

Karoo Space is the leading website on the Karoo, South Africa's Heartland. … END_OF_DOCUMENT_TOKEN_TO_BE_REPLACED

Lazy Gecko is situated in a quiet upper residential area in Cradock, … END_OF_DOCUMENT_TOKEN_TO_BE_REPLACED

Karoo Werf Gastehuis Sis situated in the historical town of Cradock, a … END_OF_DOCUMENT_TOKEN_TO_BE_REPLACED