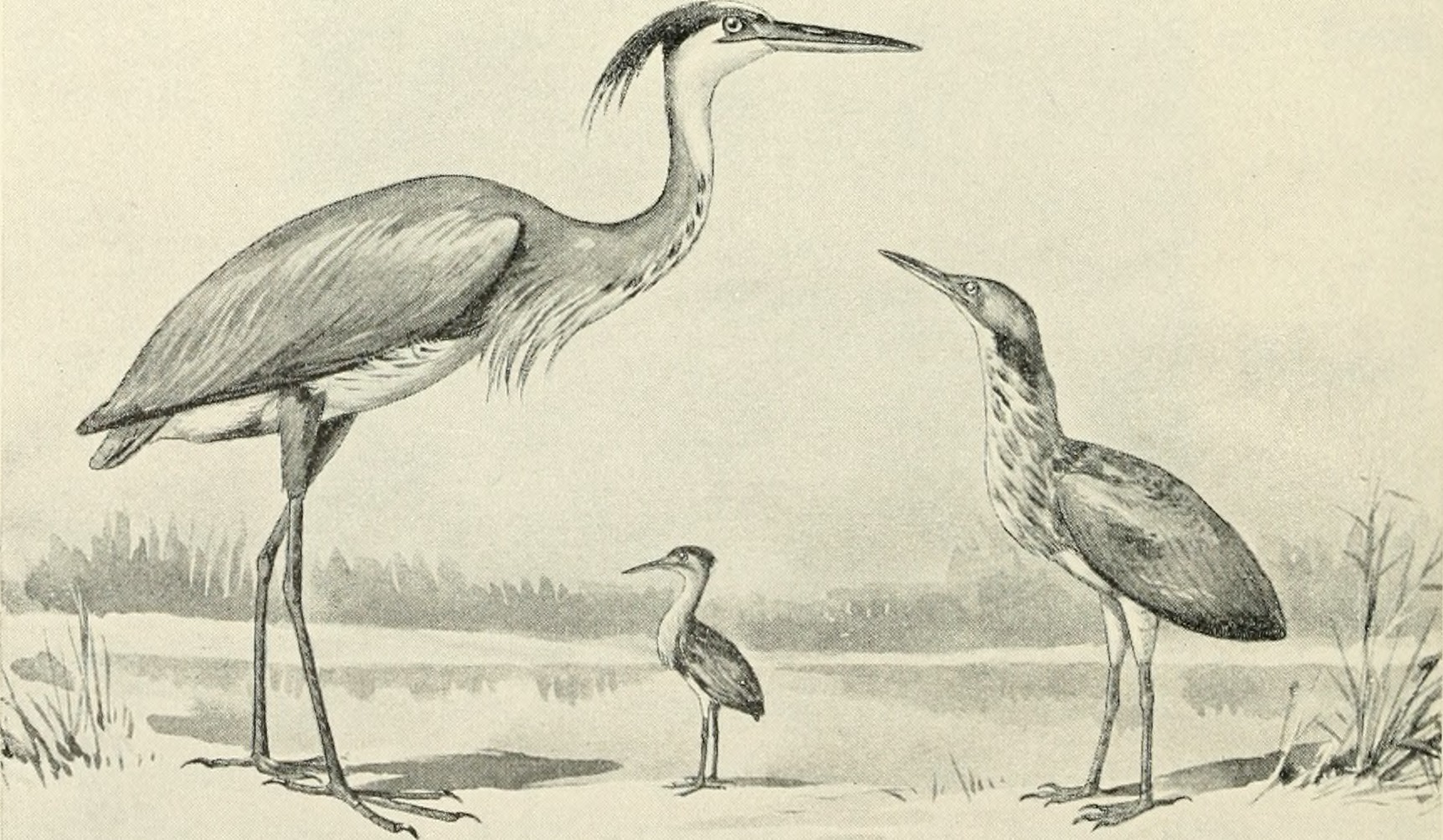 Text Appearing Before Image:
s; wing, about 18; bill, about 8.50; tar-sus, 8. The Wood Ibis is apparently not uncommon in late summer insouthern Illinois, where it was frequently observed by Prof. Ridgway,near Mt. Carmel, and Mr. J. Hurter (Bull. Nutt. Orn. Club, 1881, p.124) found it numerous in August, 1888, in Madison Co., 111., nearSt. Louis. Dr. Hoy (1853) records a specimen in the Museum of theWisconsin State Historical Society at Madison, which was shot nearMilwaukee, in September, 1852. Kumlien and Hollister consider it avery rare midsummer straggler in Wisconsin and say that in a letterto L. Kumlien, Dr. Hoy stated he had procured a specimen at Racinein September, 1868. They also record a third specimen killed onRock River between Janesville and Edgerton. (Birds of Wisconsin,1903- P- 33-) Suborder HERODII. Herons, Egrets, Bitterns, etc. Family ARDEID^^. Herons and Bitterns. About 70 known species belong to this family distributed through-out the world. Many of the true herons are gregarious, while others

Text Appearing After Image:
Great Blue Heron. Least Bittern. American Bittern. Jan., 1909. Birds of Illinois and Wisconsin — Cory. 363 are only occasionally so, if at all. When undisturbed they usuallynest in colonies or rookeries, as their breeding places are some-times called, three or four species often occupying the same tree. The Bitterns are not gregarious in the true sense of the word,although during the breeding season numbers of nests of the smallerspecies may often be found in close proximity to each other. TheAmerican Bittern is more solitary in its habits. When feeding theyfrequent the shores of rivers and ponds as well as marshes andlagoons. The food consists largely of fish, frogs, and small reptiles,which they catch with great dexterity. Subfamily BOTAURINiE. Bitterns.Genus BOTAURUS Stephens.79. Botaurus lentiginosus (Montag.).American Bittern. Local names: Stake-driver. Thunder-pump. Distr.: Temperate North America, south to Guatemala, Cuba,and Jamaica. Adult: Upper parts, brown; wing coverts,

CDK Security is based in the Karoo town of Cradock. We deliver security … END_OF_DOCUMENT_TOKEN_TO_BE_REPLACED

This business is 100% owned by me as the black woman, it is trading genral … END_OF_DOCUMENT_TOKEN_TO_BE_REPLACED

Cathy's Guesthouse is situated in central Cradock near to local shops, … END_OF_DOCUMENT_TOKEN_TO_BE_REPLACED

Karoo Space is the leading website on the Karoo, South Africa's Heartland. … END_OF_DOCUMENT_TOKEN_TO_BE_REPLACED

Pophuis is a fully equipped house situated in Cradock, ideal for a large … END_OF_DOCUMENT_TOKEN_TO_BE_REPLACED

Lazy Gecko is situated in a quiet upper residential area in Cradock, … END_OF_DOCUMENT_TOKEN_TO_BE_REPLACED