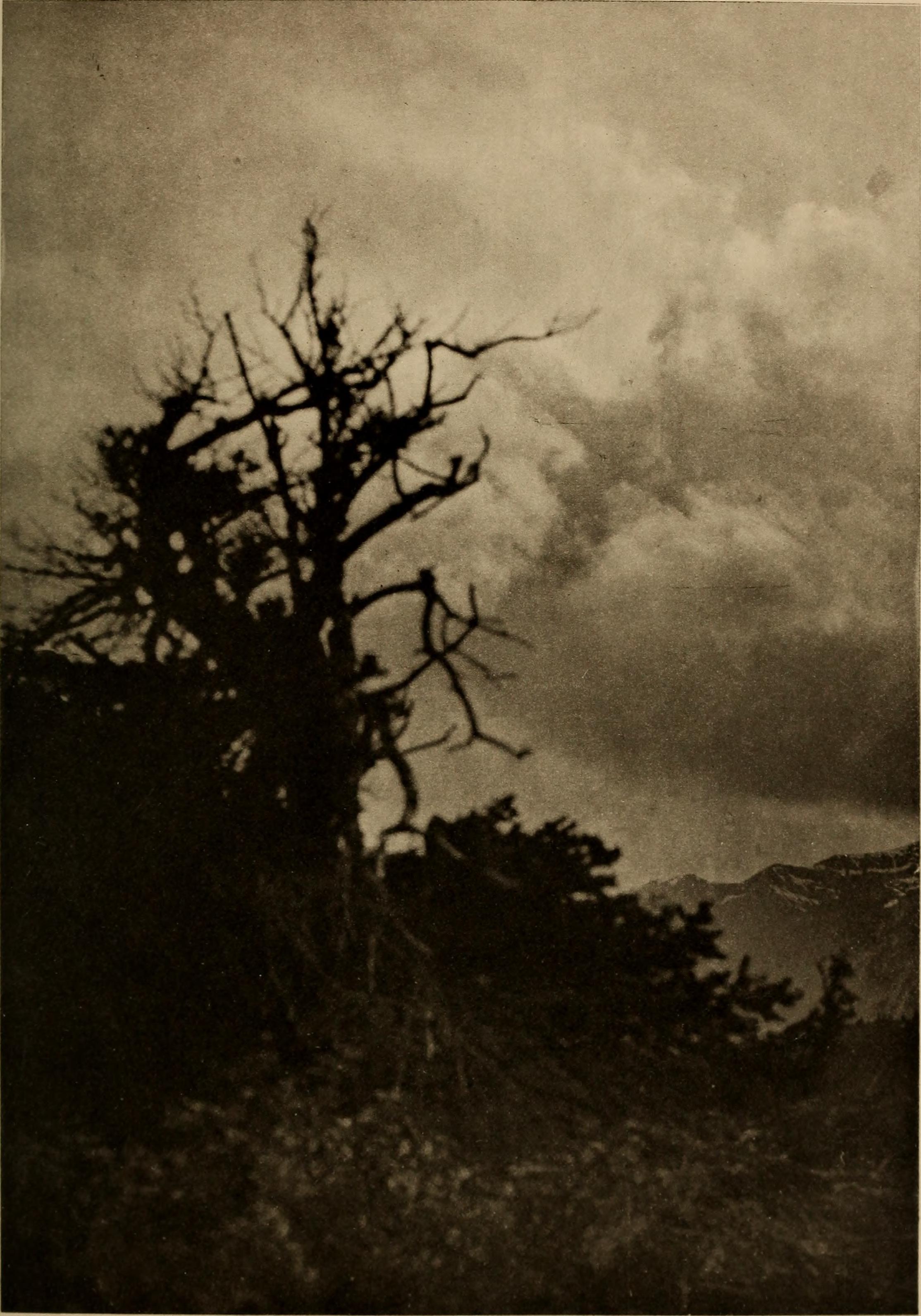 Text Appearing Before Image:
two p.m., saying he had beennearly to Eldon, in the Bow valley, east of ourcamp. Again in the evening we both set out, I upthe ridge, and Ross towards the muskegs andmeadows below our camp to the north. No signof our animals was discovered. A curious effect i 182 mat>a way back to woods, to find a good ses. Tht nile to camp was torrent with aks and noble her side. Oi was more than diameter. Tb egion, for a mile veritable par larch, and in picas, marmot nes, one of I came upon as I api evenii; ind>f sleet anfull, and li the clouds orm cene seeping The evexgrecns . . . battle with storm and avalanche andOVer the ^^V^^Wund into those forbidding heights^m^^^ghOStly m&mmttgn-dOUd WkitenS theSround ^tf^.»ha|p_ lined shadows of the were thrown in bright moonligh overed tent. Rain in the mornin nth day of consecutive :h is past ent for the u:h de- g mar ency h^ dis- Ross se, >rning, about « lad been of our t out, I up Ross >kegs and our c h. No sign als was di urious effect

Text Appearing After Image:
©ur Iborses ^Disappear 183 on our imagination was made by our trying to hearthe bell. Both of us fancied we could hear it, ring-ing constantly, in one direction or another, thoughwe could not agree upon the locality. It was useless to waste more time hunting overthe vast extent of open country that surrounded ourcamp, so I decided to send Ross back to Laggan, andthen by rail to Banff, for more horses, or another manto find our own. Owing to the cold weather I hadno doubt we would be able to cross the streamswhich come out of Desolation and Paradise valleys.In the morning at eight oclock Ross started for Laggan.Left absolutely alone in the wilderness for the first time,I spent the entire morning gathering fire-wood whichthe miners had cut, and making camp comfortable andneat. At night I banked the camp-fire, and in themorning, after eleven hours, it was still burning. August 25th. Fog and snow showers were thecurtain raiser this morning. The continuous per-formance began at ten oclock

Cathy's Guesthouse is situated in central Cradock near to local shops, … END_OF_DOCUMENT_TOKEN_TO_BE_REPLACED

This business is 100% owned by me as the black woman, it is trading genral … END_OF_DOCUMENT_TOKEN_TO_BE_REPLACED

Karoo Space is the leading website on the Karoo, South Africa's Heartland. … END_OF_DOCUMENT_TOKEN_TO_BE_REPLACED

CDK Security is based in the Karoo town of Cradock. We deliver security … END_OF_DOCUMENT_TOKEN_TO_BE_REPLACED

The gracious Victorian-style homestead, Heritage House, is situated in a … END_OF_DOCUMENT_TOKEN_TO_BE_REPLACED

Karoo Werf Gastehuis Sis situated in the historical town of Cradock, a … END_OF_DOCUMENT_TOKEN_TO_BE_REPLACED