You are here: Home / News / Images / Image from page 13 of “The Quebec Central Railway. Sights and scenes for the tourist. Pen and pencil sketches of Quebec City, the Chaudiere and St. Francis valleys, and lower St. Lawrence River” (1889) – Valley Of Desolation

Image from page 13 of “The Quebec Central Railway. Sights and scenes for the tourist. Pen and pencil sketches of Quebec City, the Chaudiere and St. Francis valleys, and lower St. Lawrence River” (1889) 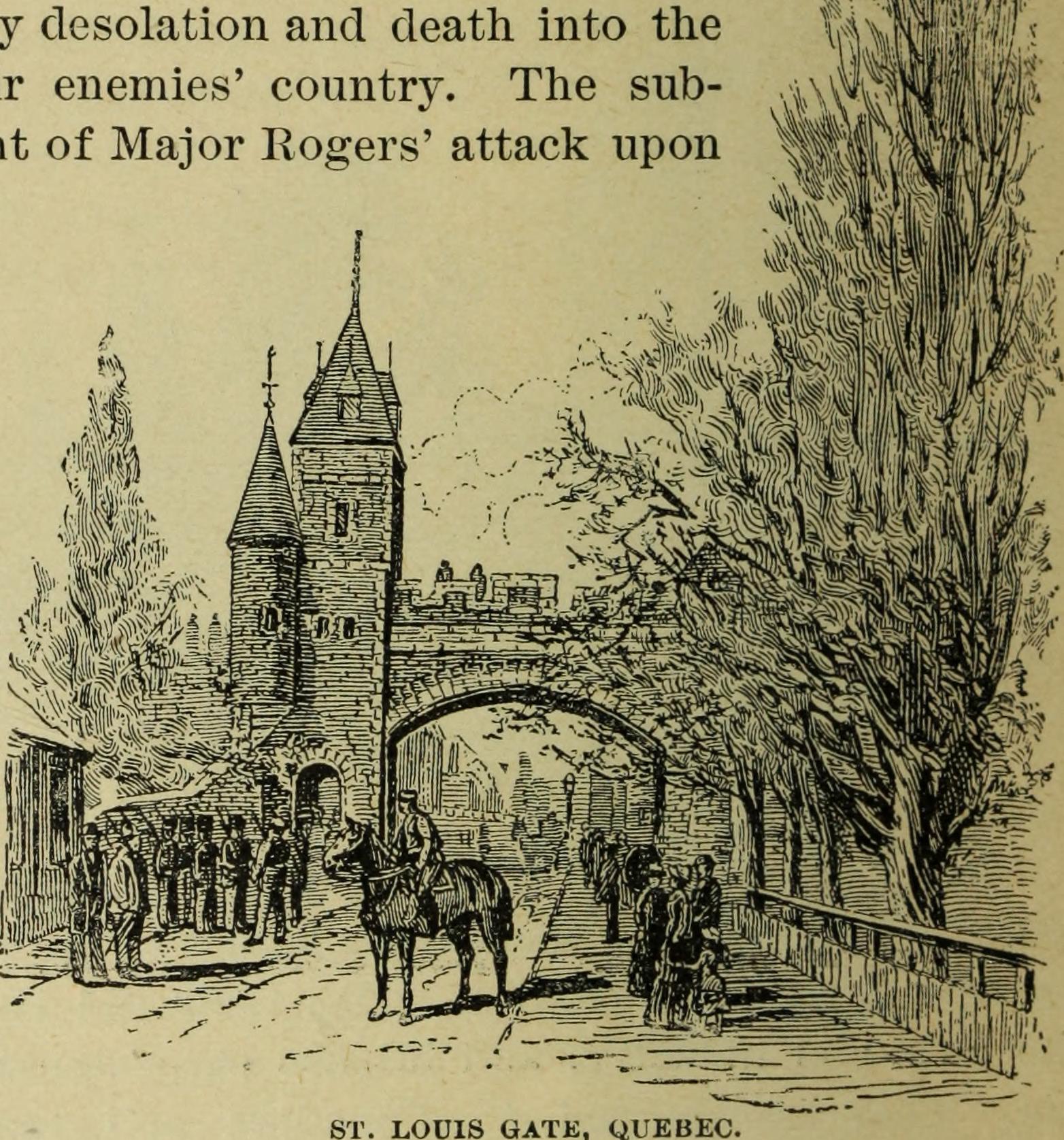 Text Appearing Before Image:
-ing course, crossing deep ravines and brawling brooks, whichat certain seasons become raging torrents. Its waters sparkleand eddy far beneath us, glimpses of whichwe catch through the woods. In the earlydays of the colony it was used as a highwayby French and English, as well as their Indianallies, to carry desolation and death into theheart of their enemies country. The sub-joined account of Major Rogers attack uponthe Indianvillage of St.Francis, inretaliationfor similaroutrages, andof his won-derful retreat \therefrom,which is ex-tracted fromFrancis Park-mans admirable workWolfe andMontcalm,will enable those fond of historical narratives to form an idea of themodes of warfare at that time : — Major Robt Rogers, sent in September, 1758, to punishthe Abenakis of St. Francis, had addressed himself to thetask with his usual vigor. These Indians had been settledfor about three-quarters of a century on the River St. Francis,a few miles above its junction with the St. Lawrence. * * * *

Text Appearing After Image:
LOUIS GATE, QUEBEC. 13 Rogers set out in whale-boats from Crown Point, and eludingthe French armed vessels on Lake Champlain, came * * * toMissisquoi Bay, at the north end of the lake. Here he hidhis boats, leaving two friendly Indians to watch them, * * *and inform him should the enemy discover them. He thenbegan his march on St. Francis, when on the evening of thesecond day the two Indians overtook him, with the startlingnews that a party of about 400 French had found the boats,and that half of them were on his tracks in hot pursuit. * * *He took the bold resolution of outmarching his pursuers,pushing straight for St. Francis, and striking it before suc-cor could arrive. ***** Much of the way was throughdense spruce swamps, with no dry resting-place at night.At length the party reached the River St. Francis, fifteenmiles above the town, and hooking their arms together formutual support, forded it with much difficulty. * * * * Atthree oclock in the morning he led his party to the att

This business is 100% owned by me as the black woman, it is trading genral … END_OF_DOCUMENT_TOKEN_TO_BE_REPLACED

CDK Security is based in the Karoo town of Cradock. We deliver security … END_OF_DOCUMENT_TOKEN_TO_BE_REPLACED

Karoo Space is the leading website on the Karoo, South Africa's Heartland. … END_OF_DOCUMENT_TOKEN_TO_BE_REPLACED

Cathy's Guesthouse is situated in central Cradock near to local shops, … END_OF_DOCUMENT_TOKEN_TO_BE_REPLACED

Albert House is a beautiful early Victorian Manor House, set in a large and … END_OF_DOCUMENT_TOKEN_TO_BE_REPLACED