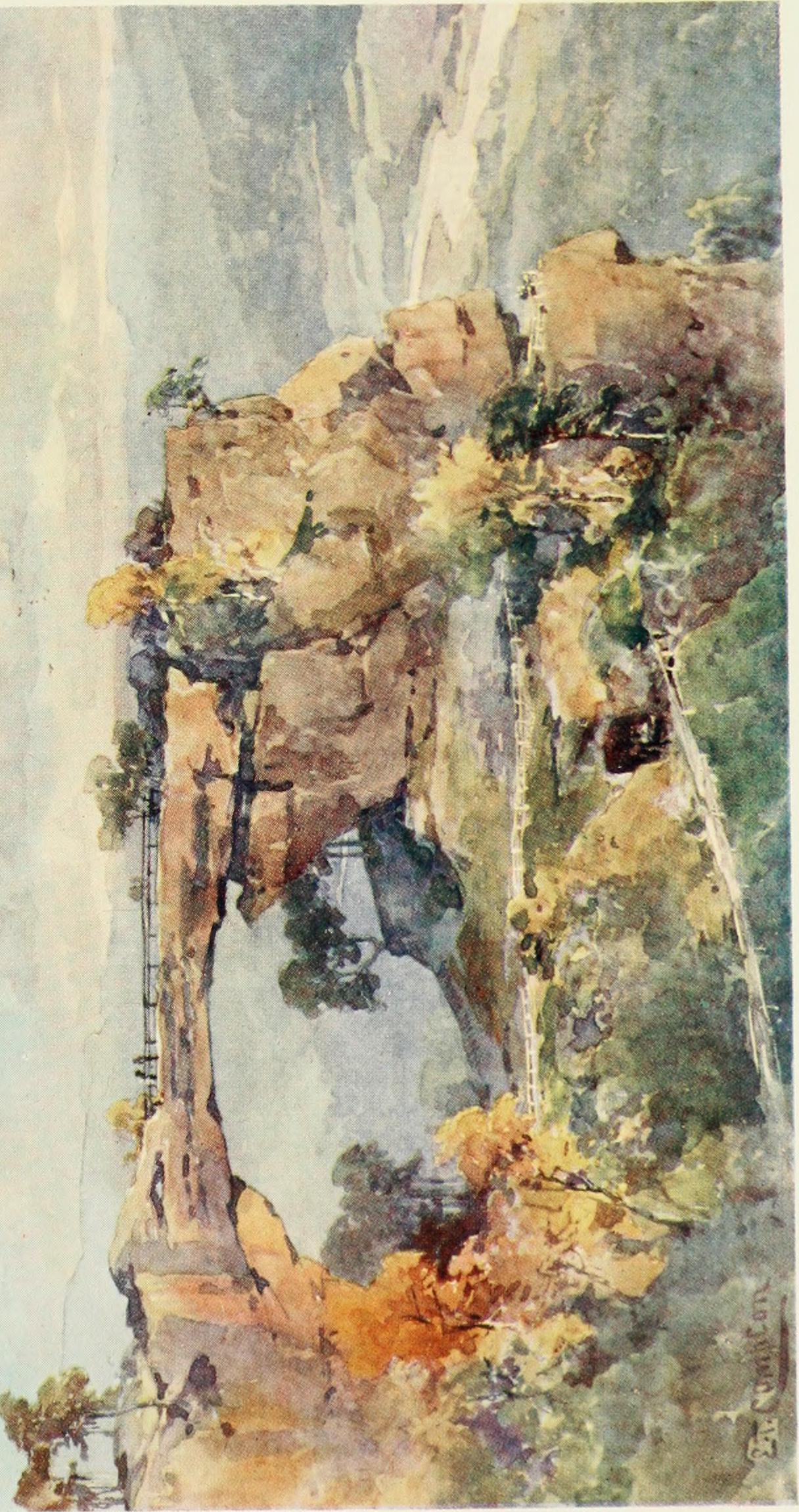 Text Appearing Before Image:
ough to endure the pressure,or whether her timbers would be suddenly rippedopen, and plunge us into the icy flood. Thedanger safely passed, we began to ascend.Through the forest, by the side of precipitousrocks that rose high above us, we pass through aclearing in the woods, reach a level plateau, andlook over a wide range of meadow land. Beforeus towers the Konigstein, that high and lonelyfortress, with its attendant giant rocks, thePfaffenstein and the Lillienstein. A magnificentsweep of the river, as it winds on its way andwaters this fertile region, lies far below. Now weturn our eyes in the direction of Bohemia, and seea goodly land stretching away far as the eye canreach. Between us and the Bohemian land liesa rocky valley of desolation. As one says, it isfilled with the riddlings of creation. It looksas if gigantic powers had battled here with great ROCK SCENERY (PREBISCH-THOR) INSAXON SWITZERLAND On the Bohemian border overlooking the valley ofthe Fllbe towards the south-east.

Text Appearing After Image:
IN SAXONY 163 stones for weapons, and the combatants and theirinstruments of war had been suddenly turned intostone. Every fantastic shape of rock appears tofrown upon you. It is a region of terror, adesolation of desolations. Yet it is grand in itsfrowning fury and its grim sublimity. It seemsan accursed land of waste places, where no manwould wish to dwell. To look from the Bastei insummer along the valley of the Elbe, with itsmerchant ships and its smihng meadows, is a greatdelight. When all the region lies under a snowymantle, and winter binds the earth in icy chainsand the Elbe in strong fetters, it is much moredelightful, and is a joy never to be forgotten. The descent by the long series of stone stepsthat lead to Rathen has new charms to disclose.Great boulders stand in the midst of the meadows,as if the giants in their play had hurled masses ofrock from the heights of the Bastei into the plainbelow. An old woman sitting by the wayside, towhom we gave alms, said, Have you seen

This business is 100% owned by me as the black woman, it is trading genral … END_OF_DOCUMENT_TOKEN_TO_BE_REPLACED

CDK Security is based in the Karoo town of Cradock. We deliver security … END_OF_DOCUMENT_TOKEN_TO_BE_REPLACED

Karoo Space is the leading website on the Karoo, South Africa's Heartland. … END_OF_DOCUMENT_TOKEN_TO_BE_REPLACED

Cathy's Guesthouse is situated in central Cradock near to local shops, … END_OF_DOCUMENT_TOKEN_TO_BE_REPLACED

Cradock House consists of five rooms within the main house, as well as two … END_OF_DOCUMENT_TOKEN_TO_BE_REPLACED

Lazy Gecko is situated in a quiet upper residential area in Cradock, … END_OF_DOCUMENT_TOKEN_TO_BE_REPLACED